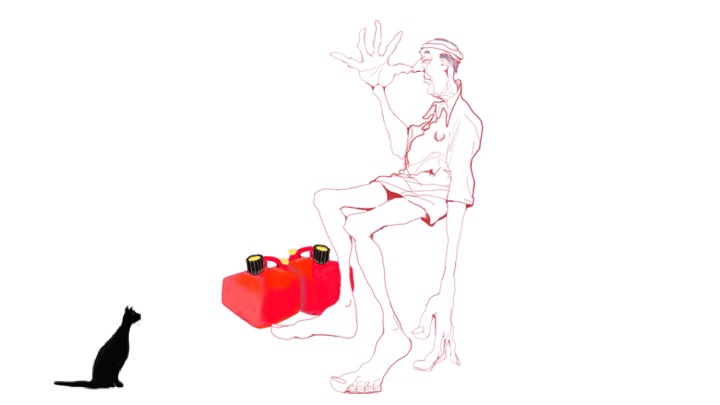 The search into the cause of the mysterious fires around South Liverpool Sports Centres was finally brought to a halt tonight when a middle aged balding Caucasian man wearing nothing but a Fred Perry singlet and a John McEnroe head band was found in an allotment shed sat on a makeshift throne of wooden tennis rackets.

Identifying himself only as Lord Andrew John Paul George Andrew Murray of Kirkintilloch (a small town in East Dunbartonshire, Scotland – editors’ note) police stated that the man denied any knowledge of the recent arson attacks in the neighborhood but could not account for the 79 plastic petrol containers which lined the shed’s walls and the oxy-acetylene torch which lay idle on the floor.

Mr. Murray – whose real identity is still subject to confirmation – is now helping police with their enquiries and is expected to appear on court in Melbourne for the Australian Open early next month and in court in Liverpool early next week to face charges.

Liverpool Social Services and the Lawn Tennis Association have been informed of the man’s arrest.

What are your feelings about Ageing Tennis Players? Otterspool Promenade? Men in Fred Perry Singlets on ramshackle pyrotechnic rafts floating down the River Mersey?

You too can have your say about this story!  Here’s what our readers are saying:

I thought it was real for about being selected for Wimbledon, literally through to the day before the semi-finals… I was coming into work saying Nick got selected, I can’t wait to read the next chapter. I loved it!  total funny journey.  (Jo McBean, Creative Triangle)

A rollicking good read that had me laughing out loud. It had me entertaining the idea of joining our local tennis club, and I’m rubbish at tennis (The Shed)

This is a riotous, rolling, rollicking read in the picaresque tradition. Eat your hearts out Henry Fielding and Herman Melville. As the hero hurtles through his ruthless pursuit of fame and glory, you too will probably receive an upgrade as you are laughing so much in your plane or train seat. Witty ( and wise) this is a cracking read. First in a series. (Liz Fincham, author)

I am at the ageing tennis player and this book hits the nail on the head with an insight and humour that made me laugh out loud. Great observation, no holds barred honesty through the arena of tennis that explores between our imagination and the actuality. (Mike Stubbs, artist, curator, consultant)