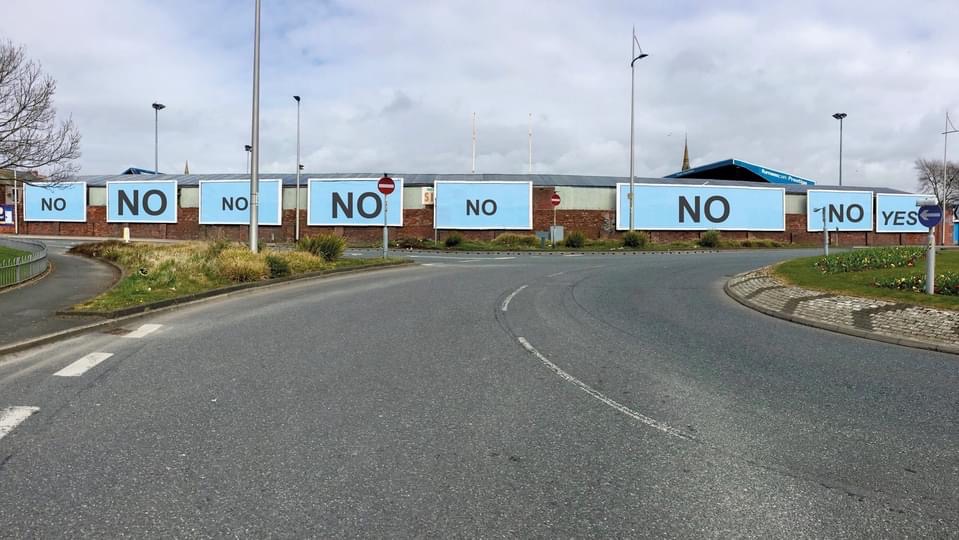 This summer, 20 prize winning phrases written by the people of Barrow-in-Furness will go on display alongside Cumbrian artists in an exhibition at Rheged Gallery, Penrith. The exhibition champions Cumbrian creativity during the COVID-19 pandemic details of which you can see here.

It all started with Art Gene’s 8 Words for Barrow-in-Furness competition during the first national lockdown in 2020.

Inspired by 8 empty sky blue billboards in the town, Art Gene invited people from Barrow and Furness to enter their own suggestions for phrases to fill the space. From over 180 entries, 20 competition winners were selected by Artist/Directors Stuart Bastik and Maddi Nicholson, and were presented in a socially distanced, outdoor artwork created by Maddi outside Art Gene HQ on Abbey Road in Barrow last year.

Nick Owen was one of the proud competition winners with his entry:

which itself was inspired by an earlier poem he wrote entitled Resistance is Futile, itself inspired by the Borg of even earlier manifestations of Star Trek.  The Borg would take immense amount of pleasure telling their hapless victims that ‘resistance was futile’ and that they just better buckle down and be happy with their lot. Even if it did mean colonisation, subjugation and eventual death.

It seemed right for this competition as he would often hear, when he was in Barrow, lots of reasons why things couldn’t happen – whether this be in a street, in a business, in a school: in all sorts of places from all sorts of people.  Hearing ‘no’ so often suggested that resistance to any kind of positive social change was pointless: and it seemed that in some quarters, the Borg were alive and kicking in Barrow.

People who tended to say ‘yes’ though were more likely to be the artists and educators who worked or lived here.  in the time he lived and worked in Barrow, he was increasingly be inspired by those who said ‘yes’ to the challenges, opportunities and sheer wonder of the town, its history and relationship with the natural (and industrial) worlds.  In short, he was reminded that resistance to the ‘no’ wasn’t futile, that difficulties could be overcome and that apathy was a choice, not a biological or economic given.

So for him, the poem summarises the aspiration of when faced with so many ‘no-es’, so many reasons not to do things, we need to find the ‘yes’ in a situation.  If we can find the ‘yes’, we can transform ourselves, our families, our communities and the world at large.

You can read ‘Resistance is Futile’ in our poetry anthology, There’s no such Things as an Englishman’ here. NIck’s other contributions to the competition are below