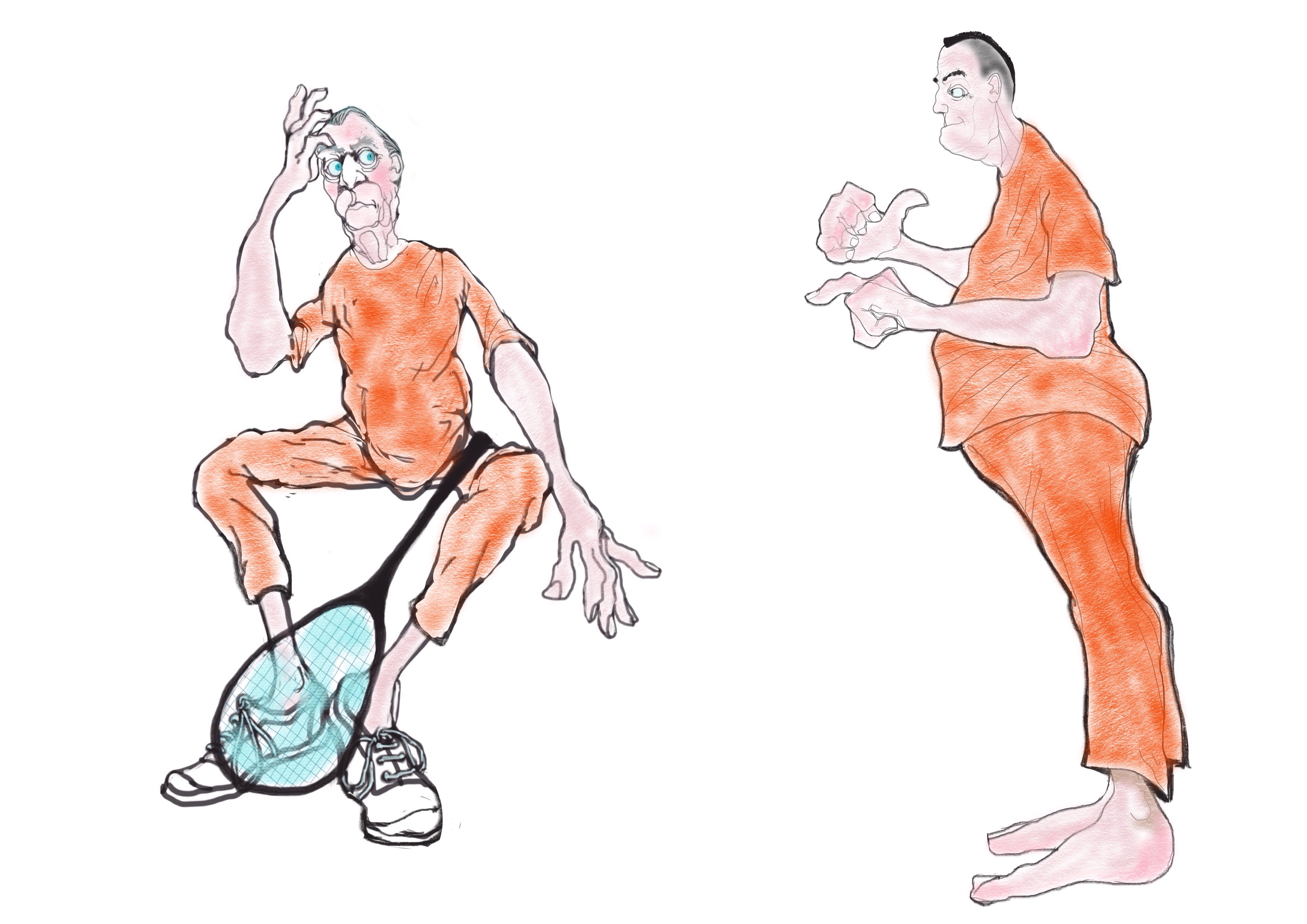 When I was younger, I used to watch the tennis on the TV and especially the guys like McEnroe, Borg and Nastase. Round about Wimbledon time, my brother Alex and I would play a kind of tennis out on our grandfather’s lawn. I would take on the role of John McEnroe and he would enact Jimmy Connors. I would invariably win.

Little did I know when starting my chronicles of my lifetime tennis achievements that such a modest turn of phrase would lead to such a momentous turn of events. How was I to know?  How was anyone to know?  And so dear reader, if these opening sentences find you bemused and perplexed, confused and convexed, then fret no further for I am about to regale you with a chronicle of ambition and achievement of modern times like no other which has left other commentators aghast and astounded.

There is so much to tell. From how I excelled at teaching tennis, to how my lucky wild card to Wimbledon led to a very public humiliation of Roger Federer and my very first Grand Slam Championship win at Wimbledon; to how I was propelled to fame and fortune by collecting –  in the face of some furious hostility from the sporting hoi polloi it has to be said – the coveted Sports Personality of the Year Award from the BBC, to the biggest accolade and challenge of my life time:  winning the public vote for the Chairmanship of the Dunblane Tennis Club, the Holy Grail of all serious tennis players.

If you have not been following that incredible story arc and the countdown to that final challenge dear reader, then fear not for I am about to reveal to you for the very first time what happened on the fateful first day of January when everyone in the club waited with bated breath for the results of the voting process.

It’s icy cold out out on the cricket pitch. Stumps left there in August and which were never retrieved due to the wicket keeper Smyth’s inability to hold his balls and bails simultaneously have been frozen into the earth like 3 Excalibur Swords, daring all who pass by to try and extricate them from their stony embrace. 3 urchins try their best to release the stumps but are thwarted at every step. They soon realise the time and come scampering back to the clubhouse, ready for the announcement which will herald a brand-new dawn for club, country and yours truly. Cricket will be played there again but not in my lifetime.

Wandering in nonchalantly from underneath rugby posts steps Spoty, the club moggie, feigning disinterest in the proceedings but secretly harbouring a desire to wreak feline havoc amongst the membership.  Spoty has never forgiven the Club’s Handyman, Trefor, for mis-spelling his name when it came to writing it on the door of the cat flap which gives Spoty carte blanche to come and go as he pleases. Trefor demonstrates dyslexia, especially in the early hours when one too many Gimlets means he can no longer read or write in a straight line. So Spotty the Black Cat -so called due to its one black spot amongst all that black fur – becomes courtesy of Trefor, Spoty.  The vote for the Chairmanship is the opportunity he has been waiting for.

And deep in the inner sanctum of the Clubhouse itself, I am dressed to impress, invest and to gracefully accept everything that is about to be bestowed upon me.  I look in the mirror, fiddle with my bow tie, adjust my boater, cough discreetly.  There’s a knock at the door.

“Enter!” I call out magnanimously.

And in she crawls, sideways, Mrs Serena Williams, cap in hand, tugging her forelock and waving the results of the vote under my nose.

I have, not to put to fine a point on it, won the vote by a complete and utter devastatingly huge landslide.  ‘Landslide’ doesn’t do the scale of my victory justice.  This is more a case of ‘Annihilation’. ‘’Humiliation’ is another bon mot. ‘Total and utter’ isn’t even close.

I thank her quietly and with dignity and follow her out to the assembled hordes, ready to make my first speech of my reign as Club Chairman.  It is important to set the tone on these august occasions and I have prepared for this moment with due diligence and with an eye on the appropriate tone of phrase which pays due respect to my opponents whilst thanking all the officials in the time-honoured tradition of throwing bags of cashew nuts at them as they cravenly step away from their hallowed spot of propping up the club bar.

The rest of the day, I have to admit, dear reader is a bit of a blur.  Winning Wimbledon was something, succeeding at SPOTY quite another but claiming the crown of the club? Even I – yes, even I – was unprepared for the emotional roller coaster that followed that moment when I was handed the ceremonial tennis bat, a couple of fuzzy balls and a Nike baseball cap and shown the back door.

It was clearly time for me to stroll around the grounds of the club, shaking hands with members of the public who had so patiently been waiting for my appearance out in the Car Boot sale car park. To the massed cheering of those on the Club balcony, I waved. To the scruffy oiks who were practicing throwing up in the cricket nets, I reprimanded them in a good spirit which suggested that this would be the last time they would be doing that on my watch. And last but no means least, to the Tennis section who had laid on a guard of honour down at the entrance to the grass courts, holding their rackets up high to form a tunnel through which I processed; I thanked them one by one and stepping forward, received the golden pick axe.  The tennis player lines parted, and the smiling captain beckoned me forward, pointing to the base line. I stepped forward, swung the axe several times over and over and over again.  Briefly, there was silence.

And then a roar when everyone realised the enormity of my act.   The grass courts were no more.

Astroturfing could begin and my reign as club chairman had begun in earnest.