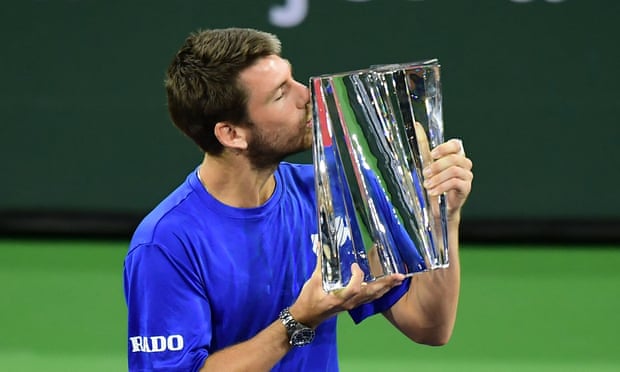 Cameron Norrie, one of the best men’s tennis player in the world, produced one of the most predictable Masters 1000 triumphs in recent memory last night. From a set and a break deficit, Norrie recovered to comprehensively thrash Nikoloz Basilashvili and become the first British man to win the prestigious Indian Wells title. Ever.

In a NOP exclusive, Norrie gives a unique insight into his playing style and why he puts his entire success down to the hard wrought experience and wisdom of Lord Andrew John Paul George Ringo Murray of Kirkintilloch, currently being Pleasured by Her Majesty at a secret location somewhere in the depths of the Californian desert.

“When I was two years old, I used to watch the tennis on the TV and especially the guys like McEnroe, Borg and Nastase” confessed Norrie to Lord Andrew over a steaming mug of gruel.

“Round about Wimbledon time, my brother Decameron and I would play a kind of tennis out on our grandfather’s lawn. I would take on the role of John McEnroe and he would enact Jimmy Connors.  I would invariably win as I was two and he was just beginning to get to grips with being swaddled.  It was all done to the fact that I had a proper tennis racket and knew how to score properly.  He had nothing and knew even less.

As I’ve gotten older, it’s become clearer that proficiency in tennis is not all about age but all about who you know and what inspirational illustrated comic guide books on how to play tennis you can read before breakfast. Your book, Lord Andy, if I may call you that…?”

At this point, Lord Andrew JPGRM of Kirkintilloch nodded sagely, giving the young buck licence to bare his soul, prostrated at his master’s bare feet.

“Your book, Lord Andy, offered me a veritable cornucopia of playing tips and tricks which helped me deal with all sorts of opponents of all sorts of sizes and shapes, playing all kind of strange shots in the oddest of circumstances.  The Californian desert being one of them.

Part two showed me how to apply those skills and strategies to go on and win a major international tennis tournament.  Last night of all nights!”

At this point, Lord Andrew’s security advisor arrived and informed the visitor that his time was up and there could be no more advice and guidance from the oracle.  Cameron Norrie however refused to leave the company of Lord Andrew and protested vigorously at his imminent ejection.

“But I need some excellent advice on how to deal with the media interest and the furore around becoming an international tennis superstar and Sports Personality of the Year!  Which is surely mine now that Emma has disappeared in a Transylvanian smog of her own making?” shrieked Norrie as the security advisor doubled in size and number.”

Lord Andrew of Kirkintilloch took pity on the young tennis buck and offered him these words of peace and harmony.

“My book, Cameron, is for everyone who has suffered at the hands of pomposity or institutional inertia and feels that the traditional English values of fair play, a stiff upper lip and self-deprecation are lacking in many areas of our public life.

With this in mind, part four offers some hard-fought wisdom about how to deal with the Machiavellian politics of the sports club and by extension our Great British society as a whole; something you have just witnessed firsthand. And for that ignominy, I am truly apologetic.  Ours is not to reason but just to sit back and take it on our substantial Roger Federer inspired chins.”

As Lord Andrew has shown many times before, Britain is not as ‘Great’ as it might like to think it is and the treatment of Cameron Norrie is yet another example of how mighty empires rise and fall.

You too can become an international tennis superstar and be inspired by Lord Andrew John Paul George Ringo Murray of Kirkintilloch by joining him in a rare attendance at Westfields Tennis Club at 21 Eastfield Rd, Leicester LE3 6FE on Thursday 21 October from  7pm.

“It’s never too late to leave your mark on the tennis court of life” as he sagely remarks here.